I have spent most of May discovering ancient footprints on Greek Islands and the coast of Turkey. It has been an incredible adventure. The great thing about traveling is being removed from my every day ruts and familiar things. When you travel you not only see new things and new people, you see yourself and your life in a new way as well.

And even though I travel in search of the past, I can’t help but come face to face with modern life. Whether it was being in Athens in the midst of riots about their economic crisis, or being in a Muslim country for the first time listening to the call to prayer from the minarets, I get to see humanity and cultures in all their facets.
I discovered some exciting and unexpected Roman footprints during my trip. Ancient Thera on Santorini was not on the itinerary but was nestled high up on the hill behind my hotel so I thought I’d go check out what was left up there. What I didn’t expect was a one kilometer stretch of ruins of a Roman era town. It was amazing.
The Roman tombs in caves beside a beach on the south coast of Crete were another pleasant surprise. I had stopped for a seafood lunch there along the Libyan Sea. After lunch, I just wandered over to look inside, and in the first cave I looked in I discovered niches and painting still on the walls and ceilings.
There were also the famous and popular sites, such as Athens and Ephesus. In Athens, I visited the less crowded Roman Agora and Hadrian’s Library, as well as the must see Acropolis. But while there were quite a few people visiting the Parthenon, it was nothing compared to the mass of humanity flooding Ephesus the morning I was there. It was rumored that three cruise ships were in Kusadasi that day and I think every one of their passengers was seeing the sights at Ephesus.
I’m still sorting out the photos and recovering from jetlag but I’ve come back feeling more alive than ever. 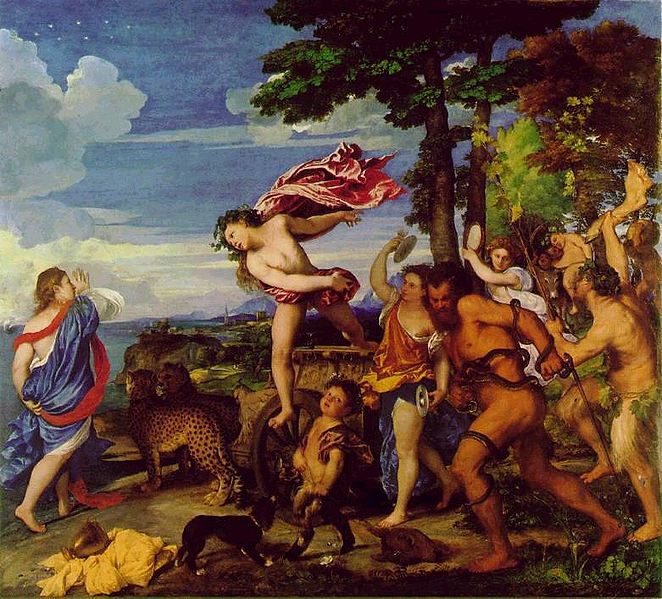 I should be heading off to Greece two weeks today, Icelandic volcano ash willing. Our first island stop is Santorini which I don’t think has any substantial Roman remains. Our second island is Crete, where we’ll be spending four days.
Of course we’ll be visiting at least 3 or 4 Minoan palaces including Knossos. I am so looking forward to seeing the palace there. It is the site of many Greek myths including King Minos, the Minotaur and the Labyrinth. Another myth set there is the one about Daedalus and Icarus. But the one that I like the best is a memory from my last trip to Greece 30 years ago. Then I stayed on the island of Naxos and knew very little Greek mythology or Roman history. But I had purchased a mythology book and read about Ariadne who was abandoned on Naxos.
Ariadne was the daughter of King Minos and she was the one who helped Theseus escape from the Labyrinth after he slew the Minotaur. Theseus was from Athens and he had promised to take Ariadne back to Athens and marry her if she helped him. They got as far as Naxos before he left while she was sleeping. When she awoke she cursed him but soon she was rescued by Dionysus who married her. Above is the famous painting of this by Titian (in the National Gallery in London) which is quite a wild scene. Anyway Theseus went on to Athens but forgot to put the white sail up to let his father Aegeus know he was alive. So his father thought he was dead and threw himself down a hill and died. Karma.
While most of the sites I’ll visit will be Minoan and Greek, I’ll also be visiting Gortyn which was the capital of Crete and Libya during the Roman Empire. There are several interesting remains there including a Praetorium, an Odeion, and an Isieion. The Praetorium dates from the second century AD and was the seat of power in the town. The Odeion is a small amphitheater which was built in the first century AD, and large stone blocks containing 5th century BC Greek inscriptions were used in its construction. These inscriptions are what Gortyn is most famous for because they are a rendering of civic law called the Gortyn Code. This law covered marriage, divorce, inheritance, slave status and much more.
Other ruins at Gortyn include a first century AD Isieion, a sanctuary of Egyptian dieties including Isis, Serapis-Zeus, and Anubis-Hermes; the Temple of Apollo-Pythios dating from the 7th century BC; and some aquaduct remains. Gortyn was named for Gortys, son of Rhadamanthys who was the brother of King Minos, who were the sons of Zeus and Europa. There is always just one degree of separation in Greek mythology.

I’ll be heading out discovering Roman footprints once more in May. I’m very excited because this wasn’t a planned excursion but an almost last minute  opportunity to go on a guided tour of the ancient sites of the Greek Islands and the Ionian coast of Turkey. It is a dream trip and perfect for discovering the ancient world with a professional archaeologist as a tour guide!

First site on the itinerary is Athens. Greece became a Roman province in 146 BC. Athens itself became a sleepy provincial university town where the young Roman elite often went for higher education in Greek rhetoric, philosophy and art. Romans were enamored with the culture of the Greeks and the most educated of Romans spoke Greek as a second language. Wealthy Romans owned Greek art and sculpture, if not originals they at least had copies.

While we’ll be looking at the classical Greek sites of the Acropolis, I am also planning to spend some leisure time at the base of the acropolis exploring the Roman footprints of Herodes Atticus, Hadrian and others. Marcus Agrippa, Augustus’ second in command, visited Athens in 15BC and built a new agora in the fashion of a Roman forum. During the second century AD, Herodes Atticus built an odeion and a stadium.

But the true Roman philhellene (lover of Greek culture) was the emperor Hadrian, who visited Athens 3 times. Hadrian built the temples of Hera and Panhellenian Zeus, the arch of Hadrian, and a library in Agrippa’s agora. Other Roman ruins around the Acropolis include the Theatre of Dionysus and a Roman bath.

I have just 3 weeks before my trip to research the Roman footprints I hope to discover on Santorini, Crete and the islands of the Dodecanese, as well as the coast of Turkey. This area is literally buried in ancient history and of course I’ll also be exploring the vestiges of the Mycenaeans, Minoans, Greeks and Ionians, as well as many more older (Persians and Phyrigians) and newer cultures (Venetians and Turks) that have put their footprints on the region. Oopa!

From Many [comes] One

I went to a lecture the other night at the university about “Cognition and Empire”. Basically it was about “when Romans took over how did they change the new place to make it part of the empire?”

It was one of those highly academic lectures where a guest professor from another university speaks to an audience of professors, retired professors, students, and a couple of people who simply have an interest in the topic. There were maybe 30 of us.

You can never be sure how accessible the speaker will be at these events, whether it will be a stroll through the topic or whether you will have to run to keep up. Tonight we had to run. Afterwards a graduate student I know said that she could barely understand it.

Sometimes I think it is more about showing how clever the speaker is than about making his ideas and subject matter interesting and comprehensible. He used very expensive words. But when it came to responding to a question afterwards, he used a couple of words that I thought were cheap – “silly” and “idiotic”. The poor student had been foolish enough to express an opinion and introduce a concept that the prof didn’t agree with. While I also didn’t think much of this concept (memory of the landscape), I did think that the speaker could have chosen more diplomatic words when dismissing it.

Luckily I did have an “aha” moment from the evening. It came during the question period afterward when a person who identified himself as a non academic was brave enough to ask a question trying make sense of the overarching theme. The prof made the point that the Roman Empire did something that no other empire, ancient or modern, ever did, and that was to give all the peoples of the empire citizenship. Well, all  if you don’t include women and slaves.

Anyway, I had known this already but hadn’t considered that Rome had been the only empire to have done it. It’s pretty impressive. I’ve always thought that the Romans had been fairly inclusive and I think that was one of the reasons their empire lasted so long. That, and providing a strong infrastructure and long periods of peace and stability throughout the empire. People like peace and prosperity. And also bread and circuses.

Veni Vidi Scribi – I came, I saw, I wrote

I begin my journey in the far western Roman province of Britannia. From Hadrian’s Wall in the north of England to the luxury villas and Saxon Shore forts of the southern coast, there are Roman footprints to discover throughout England, Wales and even Scotland.

A birthday party invitation and letters home found on wooden tablets at Vindolanda near Hadrian’s Wall. A horde of intricately decorated silverware buried at Mildenhall in Suffolk now on display in the British Museum. Elaborate mosaic floors with underfloor heating in Fishbourne Palace and Bignor Roman Villa.

Ancient walls that have stood for nearly two thousand years around the village of Caerwent in Wales. A lighthouse in Dover that once lit the coast for wary Roman sailors. The misty warm thermal spa of Aquae Sulis at Bath.

Romans marched the roads of Britannia for almost four hundred years leaving their indelible footprints on the landscape and the psyche. My journey of exploring these footprints begins.