On my recent visit to York, it was the stories of Eboracum’s people that captured my imagination. The Yorkshire Museum does a great job showcasing the people of Roman York. The exhibit includes their backgrounds which they have discovered by examining the remains from the Roman graveyard. They studied the grave goods, as well as the bones, teeth, and skulls to find clues of where the people came from, their ages, and their occupations.

One man came from North Africa, where many expert mosaic makers came from. He may have travelled from one end of the empire to the other creating mosaics for the wealthy. Another was a local man who was between 35 and 50 when he died. They could tell he suffered from a bad back because of his spine and shoulders. Another was only in his twenties when he died, but the minerals in his teeth and bones showed he ate a lot of fish and came from a cold climate, possibly the Baltic region.

I also met Eboracum’s people through their inscribed grave markers. Julia Velva was around 50 when she died. Her heir, Aurelius Mercurialis, and his family are portrayed gathering at her tombstone. On another tombstone there is a depiction of Aleia Aeliana, reclining on a couch beside her husband who had his arms around her. The tombstone of Flavia Augustina, who died along with her two infant children, was erected by her husband Caeresius Augustinus, an ex-soldier.

Soldiers from the fort at Eboracum also left their mark while they were alive. A centurion, Mat(…) Vitalis, dedicated an altar to his god Arciaco and the divine emperor.

Several well-known and historically important people were connected to Eboracum as well. The Emperor Septimius Severus died in Eboracum in AD 211 after coming to Britannia to try to conquer the north of the island. The most notable, though, was Constantine the Great, who was made emperor here in AD 306 after the death of his father, Constantius.

I also found footprints of Romans and their pets beneath the Yorkminster, in the display of the remains of Eboracum’s fort. The hobnail footprints of a soldier and the paw prints of a dog were captured in the dried clay of Roman bricks.
For more information about York’s Roman past, see Eboracum Quick Facts and Yorkshire Museum Quick Facts.

Finding the Roman footprints in a global metropolis that began as a Roman town can be a challenge. As in Paris, (Looking for Lutetia), most of London’s Roman era is buried beneath 2000 years of habitation. And what a habitation it has been.

Unlike Paris, it took me a couple of trips to find most of the bits and pieces. I’m sure I’ve missed some but I think I found the main ones. In 2011, I did a walking tour of the City of London, the square mile area in London which grew out of the Roman town. I took in the Museum of London which illustrates the history of London. From the museum there are remnants of the Roman town walls that extended to the Thames River.

I also managed to find the Mithras temple on Queen Victoria Street. It has since been dug up and will not be on display until the Bloomberg building, where it will reside, opens in 2018. It will have a much better display there than it had where I found it.

Over near the Westminster Bridge, I found a statue of Boudica and her daughters. Not Roman, of course, as she was an enemy of the Romans and laid waste to several of their early towns in Britannia. But a heroine of the Victorians because she rebelled against the invading Romans. 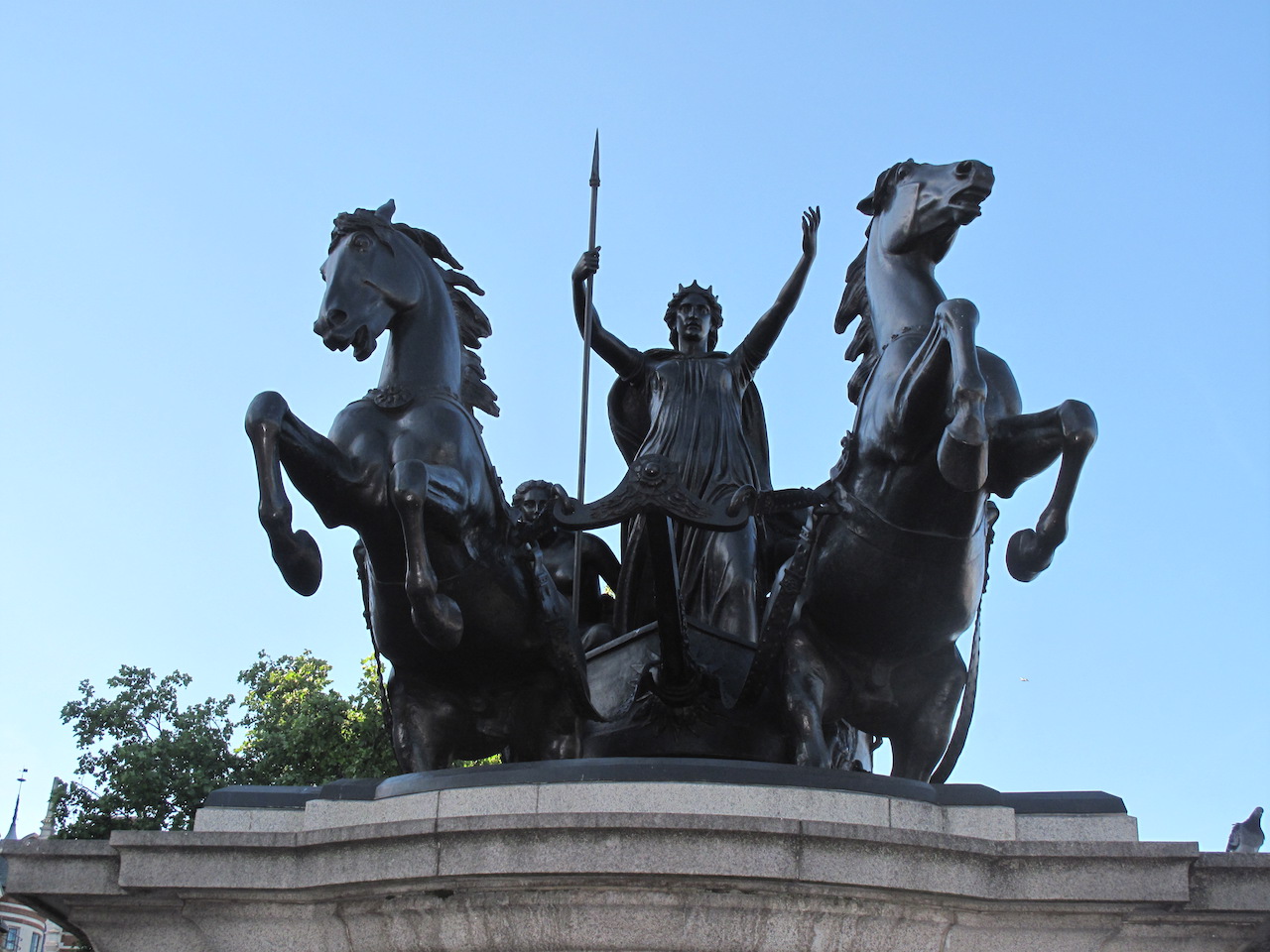 Fast forward to the autumn of 2016, when I came looking for a few more Roman sites. This time I found the amphitheatre beneath the Guildhall.

And the end of the Roman town wall at the Tower of London, along with a statue of Trajan.

At the end of the day, I dined at the newly opened Roma restaurant not too far away from the Tower of London. Their dishes are inspired by ancient Roman recipes. It was a delicious finale to my hunt for Londinium.

Not only did I happen upon the spot where a bronze head of Emperor Claudius was found in Rendham, Suffolk but I also discovered the White Horse. I visited twice – once for a quick pint and back again for dinner a few weeks later. The food was great!

Also in Suffolk, I went to Bury St. Edmunds and had a pint in the smallest pub in Britain (in Guiness Book of Records), the Nutshell.

Norfolk – Visiting the Roman forts of Burgh Castle and Caistor-on-Sea led me astray into the Norfolk Broads and to a delightful afternoon stop watching pleasure boats docking at the Ferry Inn in Stokesby.

Poking around London for evidence of Romans is best done in museums. After a visit to the British Museum, chock full of Roman artifacts, I nipped into the Museum Tavern across the street. And after a morning at the Museum of London and an afternoon discovering bits of Roman wall and finding the temple of Mithras (when it was still there to find), I had supper at the Old Bell Pub in Fleet Street.

Further west in Hampshire, lunch was needed after a visit to Silchester Roman Town and the Red Lion Pub in Mortimer West End supplied a venison and cranberry baguette along with some local ale.

Lunch at the Rose and Thistle in Rockbourne, near Rockbourne Roman villa, was a smoked salmon sandwich accompanied by a gin and tonic.

Over in the Cotswolds, I visited Chedworth Roman villa and the Corinium Museum in Cirencester. In the evening a trip along the old Roman road, the Fosse Way, took me to the Inn at Fossebridge.

The little Welsh town of Caerwent is surrounded by high Roman walls and interspersed among the modern houses are the remains of the Roman town of Venta Silurum. At the north gate is, naturally, the Northgate Inn where I stopped for a pint. Is it me, or does that Roman legionnaire look a little fuzzy?

When Romans invaded they brought their gods with them but these rarely displaced the local gods. What happened was people would equate local gods with Roman gods. It might have gone something like “oh, Maponus has the same attributes and sphere of influence as Apollo so they must be the same god but with different names.” Dedications have been found to Apollo-Maponus in northern Britain and Gaul, as well as to Mars-Cocidius near Hadrian’s Wall, to Sulis-Minerva at Bath and other similar hybrids.

In Britain, temple remains found are often those of little Romano-Celtic structures. They were fusion temples for fusion gods.

The temple foundations at Caerwent include a little apse on one end, a common feature of Romano-Celtic temples. A dedication to the god Mars-Ocelus was found here.

Romano-Celtic temples were often built in the groves and on the hilltops sacred to Iron Age Celts. They could be square, rectangular or circular with a main room or cella, and surrounded by a covered ambulatory or walkway. This is true of the Roman-era temple atop Maiden Castle Iron Age hillfort in Dorset built in the late 4th century. A bronze plaque with Minerva depicted on it was found here.

All that remains of the 4th century temple at Jordan Hill near Weymouth, Dorset is the square outline of the stone foundation walls. What can’t be seen at the site is a 13-foot deep shaft in the centre of the temple that archaeologists found. It held sixteen layers of ash and charcoal alternated with roof slabs and the bones of a bird and a small coin in each layer. At the bottom was a stone cistern with two urns, a sword and a spearhead. This type of feature is believed to have been common to prehistoric Celtic religious sites.

Benwell Roman Temple near Newcastle is dedicated to Atenociticus who is thought to have been a local god. Two cement copies of altars that were found during excavation of the temple bear these inscriptions:

To the god Antenociticus and to the Deities of the emperors, Aelius Vibius, centurion of the 20th Legion Valeria Victrix, willingly and deservedly fulfilled his vow.

To the Antenociticus, Tineius Longus (set this up) having, while prefect of cavalry, been adorned with the (senatorial) broad strip and designated quaestor by the decrees of our best and greatest Emperors, under Ulpius Marcellus, consular governor.

In Roman religion people entered into a contract with a god – “if you do this for me, then I will do this for you”. The altars and dedications found at the temples are fulfillments of this type of vow.

Classical Roman temples were known in Britain but little of these has survived. One, the temple of Claudius in Colchester destroyed by Boudica in the 1st century, was massive by all accounts. Its foundations were used as a platform for the largest Norman Keep in Britain.

There are probably one or two jokes I could make about this title, but I will leave you to your own imaginations instead. I am sure that women might have a different take on it than men. Interpretations are in the eye of the beholder.

So who or what was this cockheaded man on a mosaic in Brading Roman Villa on the Isle of Wight? There are no other images quite like it in extant Roman mosaics, so no one really knows quite to make of it.

The signs at Brading suggest the mosaic might have been a satire of the mid-third century emperor, Trebonianus Gallus, gallus being Latin for cockerel. The image is rather cartoon-like and Gallus was unpopular and apparently skewed outcomes of arena games to lead to more deaths than usual. In the mosaic he is dressed up as a gladiator trainer or animal hunter from the arena.

Taking a more serious approach, Martin Henig, in Religion in Roman Britain, identifies the cockheaded man as the god, Iao/Abraxis, and the scene as depicting an allegory on taking a straight and narrow path to heaven.

My own inclination is to go with the satirical interpretation. Yes, Iao was represented in iconography as having a chicken head but he also had snaky legs, which this man does not. This video shows a discussion about the mosaic by experts from the UK Open University who came to the same conclusion.

Serious god or political satire? What is your interpretation?
Find out more about Brading Roman Villa – Quick Facts

When you think of Roman legions you imagine fearless. You don’t imagine that they had to be bullied into boats to cross the English Channel to invade Britain in AD 43. But apparently the four legions under the command of Aulus Plautius did. Really, Romans were not keen on boats or being at sea.

Emperor Claudius crossed the channel a couple of weeks later with elephants. I wonder if they were easier to get into the boats than the soldiers? I’m not sure exactly how they were used in battle but I like to think of elephants as the ancient equivalent of tanks.

It is commonly thought that they sailed from Gesioracum in Gaul (Boulogne, France) to Rutupiae (Richborough, Kent).

Kent is rich with Roman history and Roman remains, including a third century fort at Richborough and another at Reculver.

The Roman fleet was stationed at Dubris (Dover) and there is a lighthouse in Dover Castle and in the town remains of an official hotel with excellent wall paintings.

Remains of two villas are open to the public at Lullingstone and Crofton, and there is a Roman Museum in Durovernum Cantiacorum, (Canterbury).